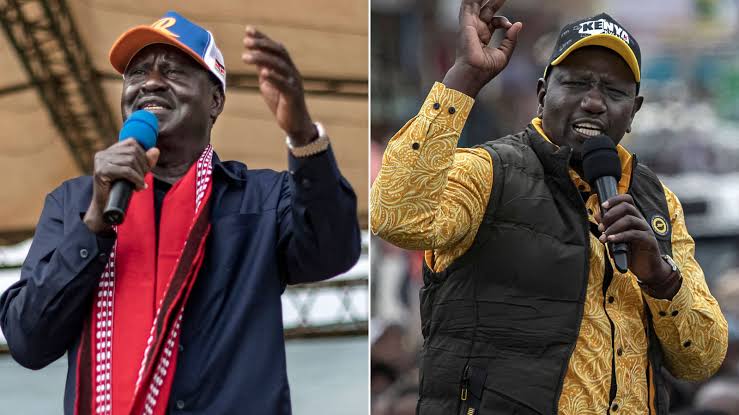 Raila Odinga is headed to replace outgoing President Uhuru Kenyatta in the August 9 General elections according to latest polls by Ipsos Synovate.

Raila Odinga has a popularity rating of 47 percent while Ruto follows him with 41 percent.

Raila has a clear advantage over the UDA party leader in 18 counties, according to the polling company, while the UDA leader has a clear lead in 17 counties. Eleven counties have been designated as “battlegrounds” that might swing the election either way.

In the gender category, Raila enjoys support among men while the UDA presidential candidate was popular among female voters.

The survey, according to the research firm, was undertaken between July 23 and July 26 in the wake of the presidential debate that the ODM leader skipped. Professor George Wajackoyah of the Roots party came in third with 2.9 percent while Agano party presidential aspirant Waihiga Mwaura scored 0.2 percent.

Samuel Muthoka, the director of research at Ipsos, indicated that there were 4 percent of undecided voters and that Raila might win the first round if he can persuade half of them to support him.