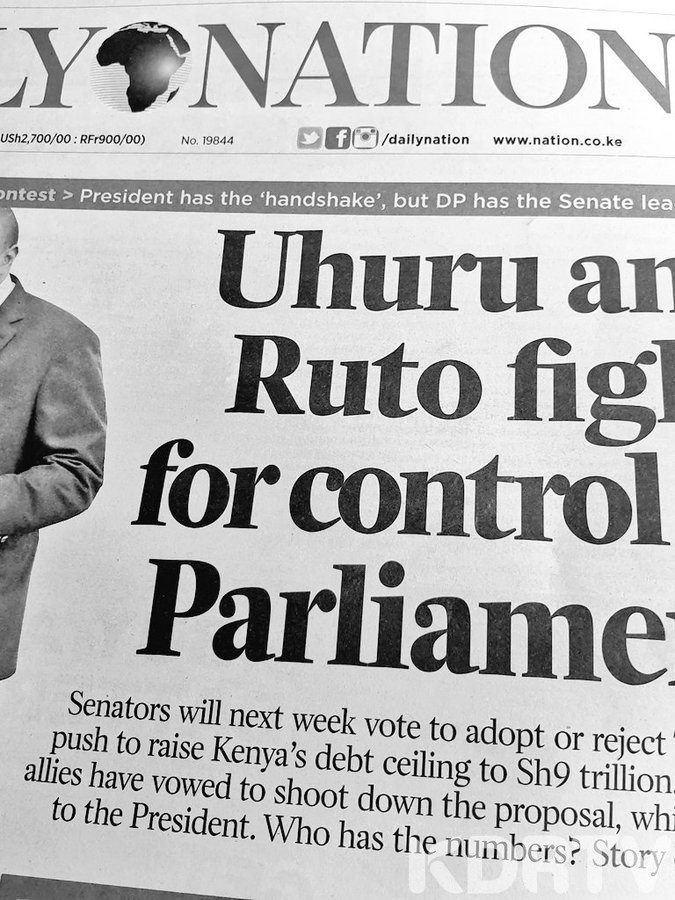 Deputy President William Ruto has blasted the Daily Nation, over what he termed as a sponsored fake story, aimed at shaking the Jubilee Party.

The story in question was about how the DP and his boss President Uhuru Kenyatta are in a vicious fight to control parliament. The paper claimed that the Senate will vote on whether to adopt or reject proposals to raise Kenya’s borrowing ceiling to a whopping Ksh 9 trillion.

According to the story, Ruto is opposed to these proposals and will rally a section of senators to reject the proposals, meaning he will go against President Kenyatta’s demands. Uhuru might be forced to ask his brother Raila Odinga and Wiper Leader Kalonzo Musyoka to get the numbers.

Read Also: Why Kibaki was the Worst Economist in Africa

But Ruto has blasted the newspaper, saying the story has been sponsored by people petrified by the Jubilee unity and who want to engage the party in pettiness. He said it is a choo (toilet) type of story.

“Obvious usual sponsored FAKES by those petrified by Jubilee UNITY who want to engage us in pettiness (mkeka/choo-type) of yore,” Ruto said through his official Twitter handle.

Ruto has further asked Senators to ignore the fake story. He said he and President Kenyatta are focused on the Big 4 Agenda and transformation.

Obvious usual sponsored FAKES by those petrified by Jubilee UNITY who want to engage us in pettiness (mkeka/choo-type) of yore. Senators should ignore this nonsense. The President and I are focused on big4 & transformation. No amount of provocation will derail us or shake Jubilee pic.twitter.com/EruyKWwDNa

Last month, parliament approved a request from Treasury Acting CS Ukur Yattani to raise the debt ceiling to Ksh 9 Billion, allowing the government to borrow up to Ksh 300 million more. This is despite warnings from the world bank that this will put Kenya in debt distress.