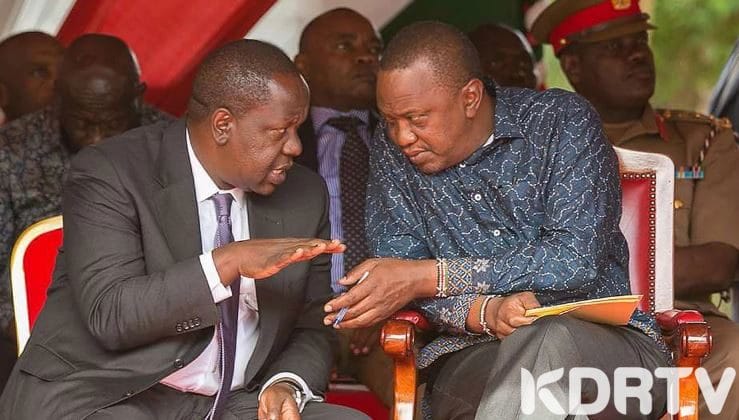 According to reliable sources, only Matiangi and Head of Public Service Joseph Kinyua were at the podium as the President met senior government officials to discuss government projects, the Big 4 Agenda, and Vision 2030.

Matiangi also spoke last before inviting President Uhuru to make his address to the officials. It emerged after the meeting that DP William Ruto had not been invited to State House.

Gachuri: A good chunk of the functions that the deputy president used to execute in the first term are now executed by the committee headed by Matiang’i. There is a shift in terms of what we call executive power #NewsGang pic.twitter.com/g8kls2eiXz

It, therefore, means that Matiang’i assumed the role of the second most powerful man in government after Uhuru, a position previously reserved for the sidelined Ruto.

DP Ruto has ADMITTED that he is indeed JOBLESS and expressed his bitterness with CS Matiang'i for taking his "roles".

Last weekend, Ruto told a rally in Isiolo that some of his roles had been given to other individuals. The DP was referring to a 2019 Presidential Executive Order which made Matiangi the head of all government projects or Chief Minister.

A section of Tangatanga MPs allied to William Ruto in Gusii region have now pledged to support Fred Matiang’i’s. MPs Joash Nyamoko, Shadrack Mose and Vincent Kemosi (West Mugirango) — say they will work with the CS. The three MPs are the DP's main point-men in Nyamira. pic.twitter.com/EzXL05IFd9

Since 2019, Ruto has been left with nothing to do but launching CDF Projects initiated by Tanga Tanga MPs. With no job, the DP has been reduced into a busybody in government, attacking and defending it in equal measures.

Matiang'i to Ruto;
"If you think you are popular,why hire goons to clap for you and heckle other leaders,then walk away when other leaders are speaking? This is pure nonsense and it may lead us to a repeat of 2007/08 PEV" pic.twitter.com/WXYOU7kJEY

This is perhaps one of the reasons that informed Uhuru’s decision to publicly ask him to resign last week.