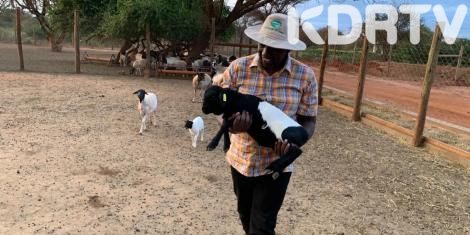 Kenya Kwanza Presidential flag bearer William Ruto has opened up about the controversial 2536-acre farm in Taita Taveta saying he got the land genuinely.

Speaking on Tuesday May 24 at Lumo Wildlife Sanctuary the DP revealed that he was given the land by former Taveta MP Basil Criticos after he helped him to pay the loan he owed the Agricultural Finance Corporation (AFC).

“I am also a Mata elder because I helped the former Taveta MP to settle his loan at AFC and he gave me a portion of land,” he said.

The ownership of the Mata ward farm, which borders the expansive Criticos ranch and Lake Jipe to the south, has been the subject of contention.

On the farm, DP Ruto cultivates maize and raises livestock; he has previously been accused of diverting water intended for the locals, depriving hundreds of people of the commodity. His manager, Arie Dempers, is also accused of bullying farm neighbors and employees.

Mr. Dempers was arrested in 2019 for entering a nearby mosque while armed with a weapon and disturbing morning prayers. And in 2020, the Taita-Taveta County administration stated that Dr. Ruto diverted the location’s primary water pipeline to his farm. It petitioned the Taveta Law Courts for permission for its officials and police personnel to enter the farm.

However, the DP requested Taita-Taveta citizens to back his presidential bid yesterday, as he is a resident of the county due to his land ownership.

He criticized President Uhuru Kenyatta and Raila Odinga during a rally in Virungani, Kwale County, for failing to solve land issues. He pledged that his administration would implement a thorough program on the Coast to address the squatters’ issue.

“We know those in Azimio can solve landless issues and restore port operations. Why not do it now? They should stop using it as a campaign tool,” said Dr Ruto.