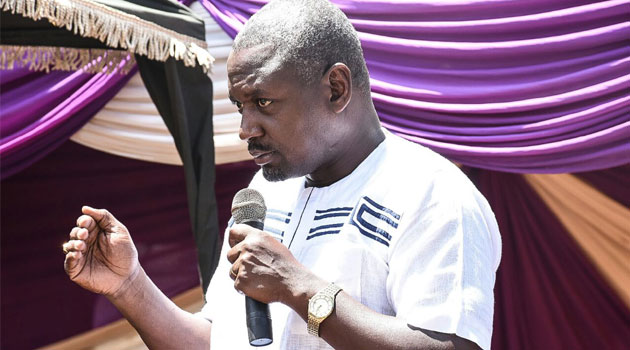 Rarieda Member of parliament Paul Otiende Amolo has claimed that some people in the Azimio la Umoja secretariat lied to Raila Odinga.

Speaking on Sunday at Mutumbu Primary School in Gem during the burial ceremony of Gem MP Elisha Odhiambo’s sister Lucy Akinyi, Otiende stated that Raila’s handlers duped him before and after the elections.

“But Dr. Oburu, we must say some things. Some people were duping Jakom (Raila),” a visibly-angry Otiende said.

“You, Oburu and Orengo, know the things that we discussed even at Bomas (of Kenya),” Otiende recalled, “Those ticks (said characters) must now leave!”

He claimed that Raila Odinga’s victory was stolen at the ballot, at the Supreme Court, and in parliament.

“The president himself was supporting Raila but the people around him were not supporting him. I think they sabotaged us,” Otiende explained.

Raila’s elder brother Oburu, on the other hand, assured residents of Siaya that they are Kenyans and that the incoming presidency will not jeopardize their status.

He also urged his colleagues to tread carefully when criticizing others.

“For now, let us not tell others to leave. Let us go slow,” Oburu said.

Langata MP Felix Odiwuor on his part told the Gem locals not to worry about Raila because he has sons like him who will be in charge of things.

“It is painful. We are sorrowful but Raila told me to tell you to remain calm because we, the sons of Luo, are still available,” Jalango said.

Siaya Governor James Orengo stated that the Supreme Court decision was not comparable to judicial literature.

He explained that in order to serve justice to both the winners and losers of a case, judges must be measured in their statements.