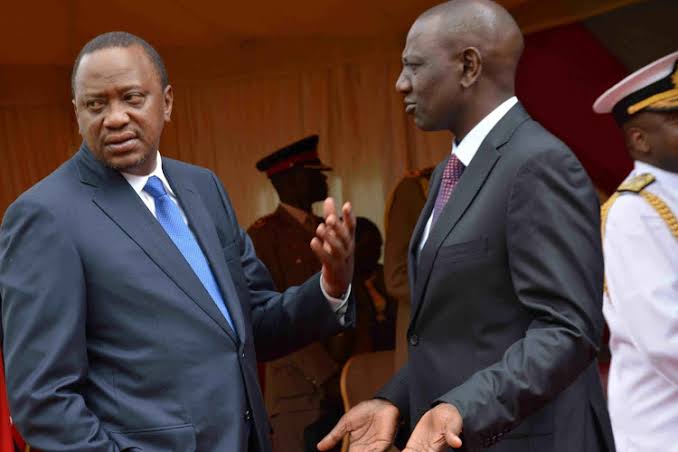 Deputy President William Ruto has asked his boss President Uhuru Kenyatta to avoid humiliating as he seeks to succeed him in the August 9 general election.

Speaking in Uhuru’s Gatundu hometown on Friday, the second in command pleaded with President Uhuru to refrain from unleashing his sword on him, despite the fact that their friendship had crossed the Rubicon.

“Please tell him (Uhuru) that Ruto has said that even if he has decided to help the Kitendawili man (Raila), I plead with him humbly, that he should not unleash the same sword we used together on him (Raila) to cut my feet.” Ruto told the Gatundu residents.

Ruto went on to ask Uhuru that not to follow the same road that was used to humiliate Raila in the 2013 and 2017 elections.

“Tell him (Uhuru) that the Ruto you are planning against is the same man you were prayed for together here in Gatundu, and even mama Ngina prayed for us, remind him that it is the same Ruto that you prayed with, please don’t hurt him,” DP Ruto said.

Ruto’s demeanor at Mutomo, Gatundu South, was unusually calm compared to his past outbursts.

This is the first time Ruto has publicly pleaded with President Kenyatta to refrain from going for the jugular following a bitter divorce.

However, the two have been embroiled in heated verbal exchanges since Uhuru declared Ruto unable to run the country for the time being.

The DP’s adherents have been mocking President Uhuru as a lame duck incapable of influencing his succession, but Ruto’s recent appeals showed the DP’s nervousness ahead of the August 9 general elections.