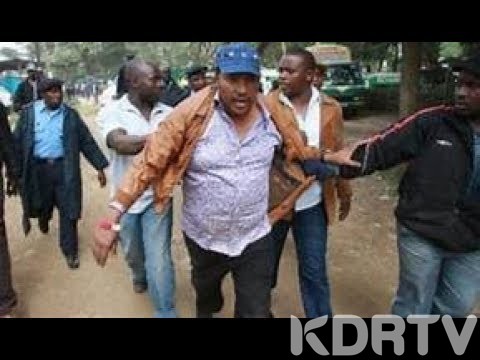 Embattled Kiambu governor Ferdinand Waititu has refuted claims that he was kicked out of the Mashujaa Day Celebrations in Mombasa on Sunday.

Social media has been awash with reports that Babayao, as he is fondly called by his fans, was forced to leave Mama Ngina Waterfront before the celebrations even started after being ejected from the VIP dais.

According to a story on Daily Nation, Waititu had arrived at the venue of the event and took a seat in the VIP dais. No sooner had he made himself comfortable than organisers walked in and told him the seat was reserved for Mombasa Woman Rep Asha Hussein.

An embarrassed Waitutu slowly exited the venue. He was captured on video leaving. The video has since gone viral on social media.

How Waititu was chased away in Mombasa yesterday during the Mashujaa day celebrations.

You know who had invited him. pic.twitter.com/CUwJ8nuSvQ

But Waititu has come out to clear the air, saying he only left the venue because the air was too hot for him and chose to follow the celebrations on TV.

“I am not a native of Mombasa. The sun and the heat was too much for me and so I decided to follow the proceedings from my room,” he said.

However, the governor confirmed that it is true he had occupied a reserved seat which caused ‘confusion’. He said he attended the event without an invitation card.

“What caused the confusion was that I did not have an invitation card for Mashujaa day. I thought it was just the normal Mashujaa Day Celebrations where you can show up uninvited, but I was wrong,” he said.

Waititu, who is facing corruption charges in court, also refuted claims that President Uhuru Kenyatta has been avoiding him because of the court cases. He said those fronting this narrative want to portray him in bad light.

Last week, during the launch of the Nairobi-Suswa SGR, Baba yao was forced to ride in the economy class while President Uhuru and other governors including Kiambu Deputy Governor James Nyoro rode in VIP.

Days after being humiliated in Suswa during the SGR launch, Governor Waititu was again asked to leave the VIP dias during the Mashujaa Day celebrations in Mombasa. The president won't pick his calls and won't guarantee him audience too. This guy is toast. Real toast. pic.twitter.com/MY8WwXsQu9