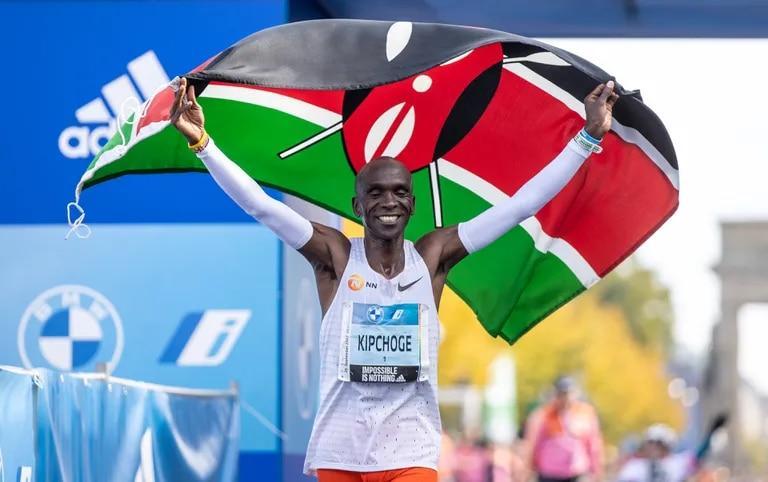 Eliud Kipchoge is arguably the most successful marathoner of all time after winning the races back to back.

The two time Olympic champion recently broke his own record by 29 seconds, running 2:01:10 in the Berlin Marathon.

In this article, KDRTV looks into Eliud Kipchoges’s side hustles that earn him millions of shillings monthly.

Kipchoge is the brand ambassador for famous sportswear Nike.  This year, Nike introduced Eliud Kipchoge’s own brand, bringing him to the level of global sports superstars with shoe and gear deals with Nike. The collection features a Pegasus 37 shoe in Kenyan flag colors with the name Eliud and the time 1:59, in honor of his Ineos marathon performance.

It also features the AlphaFly Next% shoe in the Kenyan colorway as well as running coats, tracksuits, and t-shirts with the ‘Eliud’ concept.

Eliud Kipchoge has partnered with sports supplements manufacturer Maurtens.  The marathoner has been spotted a numbe of times with the Maurtens drinks while training and in marathons. The Kenyan international drank Maurtens during his 2018 World Record-breaking Berlin Marathon race.

Eliud Kipchoge was named brand ambassador for Isuzu East Africa in 2017 after signing a deal worth an estimated Ksh14 million. He was also given a fresh new Isuzu D-Max.

Kipchoge inked a new partnership deal with Isuzu EA on October 22, 2020, to serve as the Isuzu D-Max Brand Ambassador for another year. As part of the new agreement, Isuzu EA was also to collaborate with the Eliud Kipchoge Foundation to improve community wellbeing through access to learning, sports talent development, and environmental conservation.

In 2021, Kipchoge capitalized on the NFT frenzy and sold some of his career highlights as NFTs (non-fungible tokens). He sold his the 2018 Berlin Marathon and Vienna marathon highlights for $37,000 (Ksh4.02 million)

Related: Amount of Money Eliud Kipchoge Will Receive After Breaking His Own Record in the Berlin Marathon

Subscribe to watch latests videos
In this article:Eliud Kipchoge