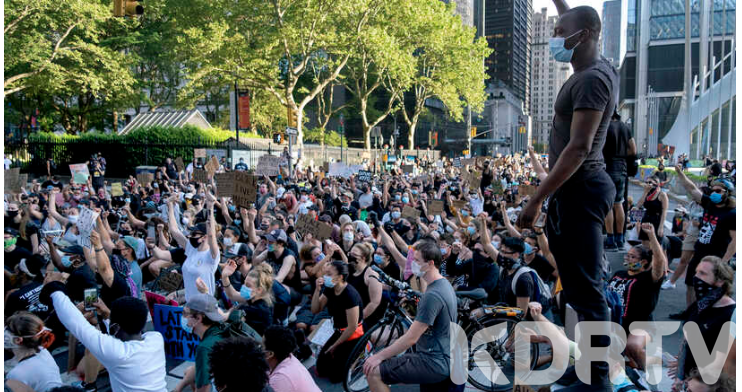 (KDRTV)- Hundred of thousands of protesters have taken to the streets of America to protests over racial injustices in the US, days after the brutal murder of African-American George Floyd

They rallied on Saturday against racism and police brutality about two weeks after the death of George Floyd.

Actually, the Saturday`s protest is one of the most massive mobilizations since the brutal killing of the American man

A section of American have also slammed the police even during the protest which they claim are against the police brutality.

This is despite the fact that the Seatle blocked the use of teargas, the officer still deployed OC gas and flashbang grenades on protesters

On other reports, in Richmond, Virginia, protesters tore down the statue of Confederate General days after the state`s governor agreed that beginning this week they will remove Confederate monuments from the capital

There are also calls across America by activists to defund the police, meanwhile, the two Buffalo police officers who were suspended after being captured on video shoving a 75-year-old protester in recent protest  have been charged with assault.

However, their colleagues have stood with them as they cheered the accused while leaving the courtroom.

The protests across the US are far from over as the protesters vowed to carry on Sunday.