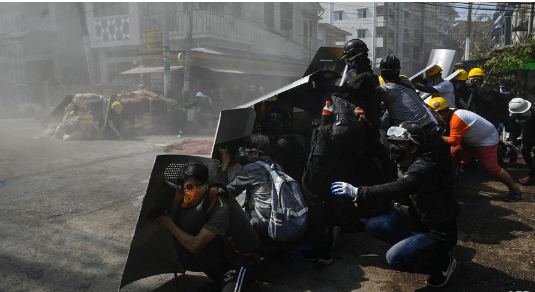 (KDRTV)-Thousands of protestors rallied on Monday night defying the night curfew to compel the security forces to free hundreds of young anti-coup protestors.

The protestors took to the street of the Capita Yangon with many people in  the neighbourhood of Yangon chanting, “Free the students in Sanchuang”

The UN and the United States have called on the Myanmar coup leaders to release those protestors being detained.

According to the UN, a section of many women who are currently being detained was caught by the force during peace demonstrations

KDRT have received reports that many people arrested by the police are being brutalized something that is against human rights.

The AAPP advocacy group announced that about 1700 people have been detained under the junta.

“Detainees were punched and kicked with military boots, beaten with police batons, and then dragged into police vehicles,” AAPP said in a statement. “Security forces entered residential areas and tried to arrest further protesters and shot at the homes.”

The Bruman people who have been rallying against the military rule have been exposed to various kinds of brutalities fro security forces.

KDRTV understands that many people have been detained while others have been killed by the police during a protest.

Both regional and international communities have imposed various sanctions on the Myanmar coup leaders.

UN, and the US among other countries have been contemplating on how to punish the junta leaders