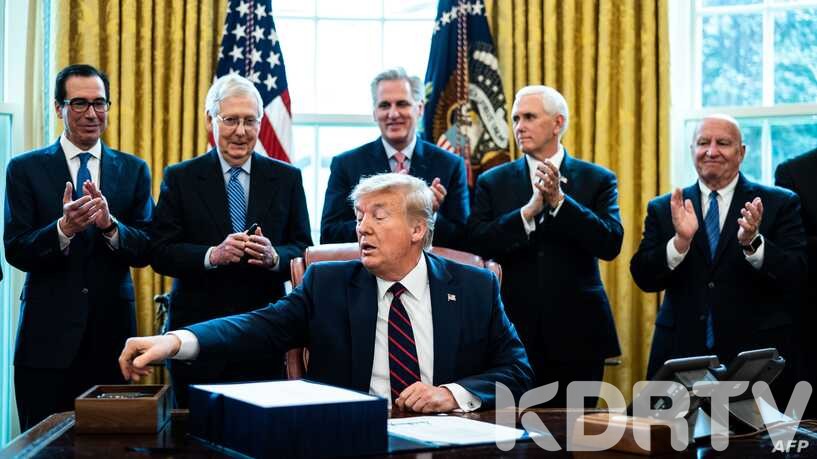 For the first time, Congress has revealed speedy and bipartisan consensus in embracing a bill.

President Donald Trump then thanked both the Democrats and Republicans for working together in making sure that Americans are put first.

“I want to thank Democrats and Republicans for coming together and putting America first,” Trump said as he signed the bill, adding, “I’ve never signed anything with a T [for trillion].”

However, the bipartisan did not span to the Oval Office. Only Republican lawmakers were present, including Senate majority leader Mitch McConnell.

McConnell praised the swift action taken by his fellow lawmakers to approve the bill. “It’s a proud moment for all of us,” McConnell said

The relief will see checks being sent directly to individuals and families, while unemployment benefits are to be significantly expanded.

Again, the overwhelmed hospitals and health care providers will receive government funding. Additionally, hundreds of billions will be channeled in aid and loans to go to small businesses and big corporations

So far, more than 104, 000 people in the United States are believed to have contracted the coronavirus and about 1, 500 have died including at least 366 in the New York

President Trump on Friday demanded increased production of ventilators, a day after he questioned whether so many were necessary during the pandemic

KDRTV understands that the US is the currently leading country in terms of the confirmed positive cases of coronavirus.